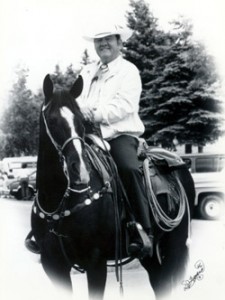 Harry Vold is one of only two stock contractors to provide animals for every National Finals Rodeo. Vold, many times voted by his peers as Stock Contractor of the Year, is known behind the chutes affectionately and respectfully as the “Duke.” Born Jan. 29, 1924, in Edmonton, Alberta, Vold tried his hand at bareback and saddle bronc riding, but he never had any ambition to be a full-time cowboy. His interest was in the horse business and auctioneering, then the rodeo business. His early exposure to the contracting business came with some of the greatest names in the business, Leo Cremer, Lynn Beutler and Harry Knight. Vold’s breeding program, primarily with bucking horses, has led to seven animals being voted top bucking stock of the year, two of which have been repeat winners. Over the years Vold stock has appeared at every major rodeo in the United States and several in Canada. “My philosophy is to put on the very best quality rodeo with top stock and top cowboys, wholesome family entertainment.” Vold does that on a consistent basis as one of the most respected men in the industry.

Posted On September 27, 2016 ~ 0 Comments
Ken Roberts – The Legendary Bull Rider Ken Roberts, the Bull Riders, is one of the many people who have participated in one of the…